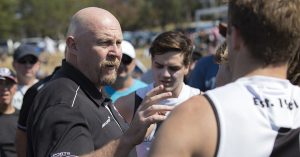 Southport have fallen to the NEAFL juggernaut that is the Brisbane Lions in Sunday’s Grand Final at Fankhauser Reserve.

Kicking with the aid of slight breeze in the first term, the Lions struck early when Rhys Clark gifted a goal to Ben Keays and Cedrick Cox then goaled soon after.

Mitch Johnson put the Sharks first on the board eight minutes in. The Lions goaled again before a 10 minute scoring stalemate. The last four minutes of the term saw Brisbane slot three goals and all of a sudden we were 32 points in arrears at the first break.

Both sides traded goals early in the second term. Tom Fields landed a long bomb from outside 50 and when Fyfe and then Manteit goaled, the margin was back to 25 points. This was as close as we would be for the rest of the match. From this point, Brisbane slammed on five straight goals to go to the main break 56 points up. The game was as good as over.

Steve Daniel asked the players to lift individually as reputations are on the line in Grand Finals. Intensity improved somewhat but scoring was proving tough and the Lions added another five goals to open up a 90 point margin at three quarter time.

The final challenge of the year was to keep the margin under 100 points and last quarter goals to Johnson, Dale, Boston and then Johnson again was enough to win the quarter and have the final margin at 76 points. Brisbane were too good on the day and they deserved to win the flag after an undefeated NEAFL Season.

Congratulations to all involved at our club on making it to a second straight NEAFL Grand Final.