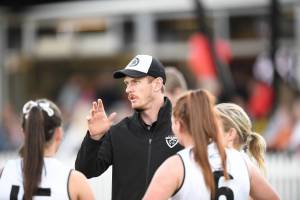 Davis joined the club in 2018 as a player after stints in the AFL for the West Coast Eagles and Gold Coast Suns.

He won the Andrew Ireland Medal for best on ground in the Sharks 2018 NEAFL Premiership.

In 2020 he became the Southport Sharks inaugural senior women’s coach and took the side to back-to-back premierships in the QFAW Division 1 competition in 2020 and 2021.

Now, he will be the coach to take the club into a new era in the QAFLW.

Southport Sharks GM Jarrod Field is excited to have Ryan continue as the senior women’s coach at the Sharks.

“Ryan has done a terrific job in our first two seasons.” Field said.

“He is a much-loved character who cares deeply about his players and helps the group achieve their best.”

In 2022, the club will introduce a Reserves team to play in the QAFLW Development League.

Mal Smith will coach the 2022 QAFLW Reserves team. Mal has been a junior coach at Southport and was a representative coach for the Gold Coast Stingrays.

Most recently, he was the Runner for the senior women’s team in 2021.

If you are interested in trying out for QAFLW football in season 2022, please click on this link to register your details.