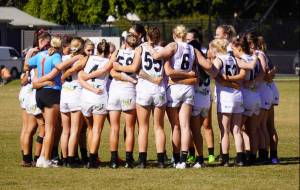 Southport has won the first ever Shark Showdown after defeating the Bond University Bull Sharks by 33 points on Saturday.

After the match, Southport Coach Ryan Davis said he was really pleased with the win.

“We had a high hunger for the contest for the full four quarters, which was fantastic to see.”

It was a high pressure first quarter, with neither team able to score a goal until Bond kicked a goal moments before quarter time.

Davis said, “It was disappointing to concede a goal late in the quarter, but I wasn’t disappointed with our first quarter. I thought we were playing well but couldn’t get the reward for effort on the scoreboard.”

“The message at quarter time was just to keep going. We knew we would keep getting opportunities, we just needed to hang in there, and that’s what we did.”

In the second quarter, the Sharks kicked five goals to zero.

Darcie Davies and Bree McFarlane stood up with some outstanding contested marks and kicked two crucial goals each for the quarter.

It was a great team performance by the Sharks. Maddy Watt (18 disposals & 14 tackles), Georgia Breward (18 disposals & 7 clearances) and Poppy Boltz (30 disposals) were back to their best in the midfield.

Akayla Peterson (24 disposals and 6 clearances) was impressive on the wing and played a superb role in transitioning the ball from defence to the forward line.

The Southport Sharks play Bond again this week, as last weekend was a catch-up game for the washout in Round 8.

The game starts at 12:00pm on Saturday at Fankhauser Reserve.

Southport’s seven game winning streak has ended after Bond University Bull Sharks defeated them in the Shark Showdown by 38 points.

After the match, Southport Coach Mal Smith said the result was disappointing but not the effort the girls put in.

He said, “They worked hard for the whole 68 minutes and showed a lot of grit and character. So, I cannot fault them for their effort.”

Southport came out of the blocks flying with Under 17 Paris Couzijn kicking the first goal of the game within the first minute.

“It was a special moment,” Smith said. “All the girls got around her, which was fantastic to see.

Southport’s intensity lifted in the second quarter and reduced the 14 point quarter time margin to seven points at halftime.

Unfortunately for the Sharks, they couldn’t keep the momentum going in the second half.

There were plenty of shining lights in the loss, though.

Ashlee Flick played well in the middle, Elle Parker’s tackle pressure was fantastic, and Jayde Struhs minimised much of the damage in defence.

All three Under 17’s – Paris Couzijn, Elizabeth Andres and Chloe Richards played well, demonstrating that the Sharks’ future is in good hands.

The Southport Sharks play Bond again this week, as last weekend was a catch-up game for the washout in Round 8.

The game starts at 10:00 am on Saturday at Fankhauser Reserve.