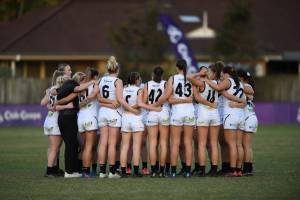 The QAFLW Round 12 match between Southport and Aspley was abandoned in the second quarter due to an injury.

The player is recovering well, but as it took over half an hour for her to leave the field, the game had to be abandoned.

As it was not half time yet, the match was deemed a draw and both teams were awarded two points.

The Sharks, second on the ladder, have four games left in the QAFLW in a very tight season.

This week they play local rivals Bond University who are third on the ladder, in an important game for both clubs.

The game will occur at 12:00pm at Bond University and is the catch-up game for the washout in Round 8.

In the QAFLW Reserves Round 12 match-up between Southport and Aspley, at Graham Road on Saturday, the Sharks were victorious by 9 points.

Southport Coach Mal Smith said, “it was a really tough game but did so well to be able to push through and win.”

The game started late due to the injury in the senior game.

Smith said, “I’m really proud of them. It was a late night in Brisbane, but the girls just stuck together to get the four points.”

It took a quarter for the Sharks to get into the game after Aspley got off to a fast start.

In the second quarter, the Sharks hit the front, kicking three goals to one for the quarter to lead by 2 points at half time.

In the third quarter, Southport was able to kick another goal to give them a seven-point buffer at three quarter time.

The Sharks were able to hold in the last quarter as neither team was able to score.

Zali Cheffers was the Sharks’ best for her midfield performance. It is not where she usually plays but she did a fantastic job helping the Sharks transition from defence forward.

Lily Munro was also excellent in the midfield, and Taylor Gregory finished with two goals.

This week Southport play Bond University away from home at 10:15 am in the catch up Round 8 game.