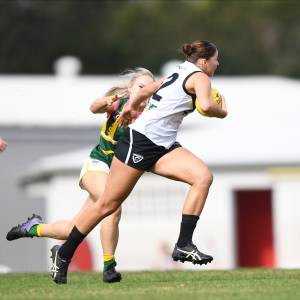 Southport’s QAFLW seniors are into the preliminary final after defeating Maroochydore by 41 points in the Elimination Final on Saturday at Yeronga.

After the game, Southport Coach Ryan Davis said, “It was an outstanding performance from the girls from start to finish.”

“It was probably the most even team performance we have had all year. It was so good to see, especially in a final against a quality opposition.”

The Sharks broke the game open up early and led by 25 points at quarter time.

The Sharks continued to get the ball forward in the second quarter but couldn’t capitalise on the scoreboard like they did in the first.

Rianna Schipp was terrific in her return game from injury. Poppy Boltz and Georgia Breward were good in the middle, and down back, Leigh Alder and Kaylee Kimber were important in the victory.

Up forward, Darcie Davies led the way for Southport with four goals.

A game highlight was when Tatum Shaw kicked her first goal in the QAFLW in the third quarter.

Whoever wins plays UQ in the Grand Final on August 7 at Yeronga.

Southport’s QAFLW Reserves are through to a Grand Final after defeating Bond University by 12 points in the Qualifying Final on Saturday.

The Sharks started well, kicking three goals to zero in the first half.

After the game, Southport Coach Mal Smith said, “I am so proud of our group. They have worked so hard for this and have never given up.”

“We are so excited, but we know we need to keep a lid on it and channel that excitement toward preparing well for the Grand Final.”

Jess Brock was terrific for the Sharks in the ruck and up forward.

Lily Munro was her usual self in the middle getting first to the contest and getting the ball forward.

Indira Maradani and Alessia Smythe were tremendous down back.

Maggie O’Connell’s two first quarter goals were crucial and gave the team a lot of momentum.

In the Grand Final, Southport will play the winner of this weekend’s preliminary final between Bond University and Coorparoo.

The Grand Final will take place at Yeronga on August 7 at 12pm.