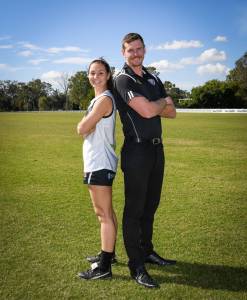 Speaking to media during the week, they both said it was pretty special to have both the senior and reserves teams in the last game of the season.

Malouf said, “It is incredible. We have a big challenge ahead of us, but making a Grand Final in our first year in the QAFLW is unbelievable.”

Davis echoed Malouf sentiment that having both teams in the Grand Final is a testament to how the players have bought into the program.

Southport’s senior women’s program is three years old, and they have already won two premierships, winning the QFAW Division 1 Premiership in 2020 and 2021 before being promoted to QAFLW.

“The program has come a long way since its inception. At our first training session in 2019, we had eleven players. Now, we have two teams playing off on QAFLW Grand Final Day.”

“It is great for football on the Gold Coast that we have a pathway now from Auskick to AFLW for aspiring female footballers,” Davis said.

Malouf also mentioned that she is excited by the future of female football in Queensland.

“I started playing senior football thirteen years ago. To see the development from then to now is amazing.”

“The talent coming through Queensland is exceptional, especially at Southport, it blows my mind.”

Both teams will be in for a massive challenge Sunday.

The Reserves will take on Bond University at 10:40, and the seniors will take on UQ at 1pm, who are both reigning premiers in the respective grades.

Davis said, “UQ is a powerhouse team in the competition. They are hard, physical and fast. We will need to be at our best to win.”

Both games will be held at Leyshon Park in Yeronga.

Entry will be via the main gate on Cansdale St. General Admission is $8 for adults, $5 concession and U16 free.

You can live stream both games on Cluch TV.