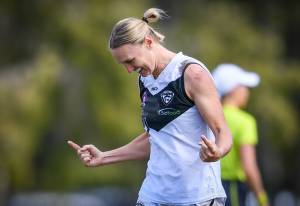 Southport has made the QAFLW Grand Final in their maiden season in the competition.

They defeated their local rivals Bond University by 30 points on Saturday in the preliminary final to lock in their spot in the Grand Final against University of Queensland.

The Sharks were on from the first bounce, with their relentless hunt on the ball and tackle pressure when Bond had it.

Bond kicked a consolation goal in the last quarter, but the day belonged to Southport.

After the game, Southport Coach Ryan Davis said, “I was really pleased with our pressure. We have been building it over the last few weeks, but to bring that level of pressure in a big game like a preliminary final is fantastic.”

“Everyone contributed to this win which is exactly what you want in the big games, and we hope for the same next week.”

Georgia Breward was exceptional in the victory, with 31 disposals, 27 of which were contested.

Darcie Davies might not have kicked a goal, but her tackling pressure and marking inside 50 was valuable.

Southport will now have their senior and reserves team playing on Grand Final day.

“It is great to have both teams in the Grand Final, and we are excited, but the job is not done yet.”

Both games will be played at Leyshon Park in Yeronga on Sunday.

The Southport seniors will play against the University of Queensland at 1:00pm, and the Reserves will play Bond University at 10:40am.

Tickets cost $8 for adults, and FREE for kids Under 16. Tickets are for purchase at the gate only.

You can watch the live stream of both game via cluch.tv

Click here to keep up to date with Southport Sharks Football News.