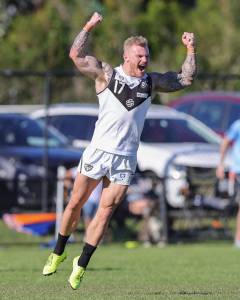 Mitch Johnson has become the first Southport player to kick ten goals in a VFL match, just five games into the Sharks admission in the competition.

The Sharks were ruthless against their arch-rivals Aspley, crushing them by 109-points on their home ground up in Brisbane.

The Hornets have shown this season that they love to get off to a fast start, and this game was no different.

When VFL Leading Goal Kicker – Matt Hammelmann kicked two goals in the first fifteen minutes, it looked like the Sharks were going to be up against it.

However, some settlers in the first quarter from Mitch Johnson, who became the man of the afternoon, was enough to steady the ship.

Johnson kicked three goals in the first quarter, one in the second quarter, two in the third and three in the last, in an unforgettable day out.

What is even more impressive about his performance is that he started the year playing for Palm Beach in the QAFL and earning his spot in the team the hard way.

Sharks coach Steve Daniel couldn’t be happier for Johnson and his reward for effort.

Daniel explaining after the match, “he had to work on a couple of things at the start of the year, which is why he played the first three games in the QAFL.”

“To his absolute credit, he had a great attitude; he worked on those things and has become a better player for the system we are trying to play with.”

“Today, he gets that reward, which is absolutely awesome for the effort he has put in.”

Brayden Crossley was also rewarded for his excellent start to the year, kicking four goals of his own.

After a week off with an injury, Andrew Boston was a welcomed inclusion, as the midfield dominated the contested ball and clearances again.

Southport have no time to dwell on the win, though, as they play the SUNS in the first Coast Clash in the VFL on Friday Night at Fankhauser Reserve.