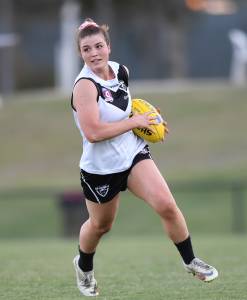 Maddy Watt has become the first Southport senior woman to win a competition best and fairest after winning the QFAW Division 1 Best and Fairest last night.

She shared the honours with McNabb, who will be playing for Surfers Paradise on Sunday in the Grand Final against the Sharks.

Watt was delighted when she heard the news whilst playing the audio of the announcement through her car’s Bluetooth coming home from one of her three jobs.

“I’m so honoured. I have really enjoyed playing this year. It has been a lot of fun.”

Away from the footy field, Watt is a busy girl. Working in retail, a bakery, aged care, and studying social science at university makes this accolade even more impressive.

Coach Ryan Davis said, “Maddy is someone who gets the job done week in, week out. The way she goes about her football is outstanding. She is an absolute star, and she thoroughly deserves the award.”

Watt is a Sharks junior, playing for the club from 2014-2018 before having a stint at Bond University in 2019, but returned last year when the new women’s team was created.

The midfielder saying, “I’m loving being back home. I love these girls. They are so supportive and go out of their way to encourage you, which is awesome.”

Although proud of her individual achievement, her eyes are focused on the weekend’s Grand Final against Surfers Paradise.

“I’m nervous about the weekend, but I can’t wait to go out and try and win the flag again with these girls.”

You can watch Maddy, and the rest of the women’s team play in the Grand Final at Bond University on Sunday at 2:30pm.

Replay of the QFAW Awards