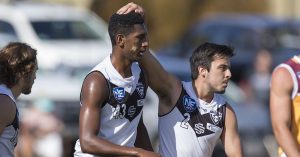 In a classic game of two halves, a young but determined Sharks team took it right up to the undefeated Brisbane Lions until half time but fell away badly during the second half.

Going in against 21 AFL listed players and a likely draft candidate, the game started in disastrous fashion when Trent Stubbs was KO’d in a marking contest five minutes into the first quarter. Baru and Boston both goaled during the term but the Lions held sway by nine points at the first break.

Ford, Johnson and O’Shea all goaled early in the second term and suddenly we were eight points in front. Brisbane were able to kick the next three and wrest back control but Jack O’Shea and Charlie Ford both added their second goals for the quarter and against all odds, the Lions only led by 18 points at half time.

HarryArnold suffered a foot injury and was iced early in the third term, and combined with the early loss of Stubbs, the lack of run was quickly becoming evident. The floodgates were well and truly opened as Brisbane slammed on 10 unanswered goals during the third term and another seven in the last. The bye has arrived at the perfect time as we need to regroup and prepare for Round 20 in Darwin.