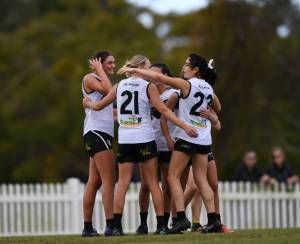 Kool Beanz Academy has played a significant role in the success of the Southport Sharks women’s football program, which will featured both the seniors and reserves in the Grand Final this year.

Since its inception in 2020, Kool Beanz Academy has partnered with the Southport Sharks senior women’s team, which has produced three premierships – 2020 QFAW Division 1, 2021 QFAW Division 1 and 2022 QAFLW Reserves.

Founder and Owner of Kool Beanz Academy Bruce Coulson has over 16 years in the childcare industry and has a solid reputation as a high-quality, safe, professional and child-centred provider.

Mr Couslon is very excited about the centre opening.

He said, “It is six years in the making, and we cannot wait to welcome our little beanz and provide an environment like no other.”

“The centre will be state of the art. There will be purpose-built classrooms, learning specific environments such as STEM room, art studio and library, and luscious outdoor space featuring a creek, mini oval and vegetable gardens.”

“We are also partnering with Autism Queensland to create a one-of-a-kind inclusive centre.”

If your child, grandchild, niece, or nephew is starting school next year or in a few years, give them a great head start.

Consider sending them to a childcare centre that provides high-quality early childhood education in a fun, caring, and supportive environment.

Enrolments for Kool Beanz SUNS are filling up fast. Please reach out to the Kool Beanz team to enrol your child today.