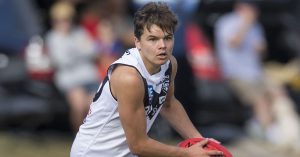 Perfect conditions greeted the Southport Sharks in Darwin as we took on the NT Thunder in a bid to secure a second placed finish and qualify for a home Preliminary Final.

The game started with Ryan Davis in the midfield but it was his former Suns team mate in Matt Shaw who opened the scoring with a classy goal on the run. Bowie added another as the Sharks dominated territory before NT finally hit back with a goal 12 minutes in. Johnson, Davis and then Fields all goaled to extend the lead to 29 points at the first break.

Josh Hall kick started the second term with an early goal then followed by a great goal from Jack O’Shea. Davis marked and added another and when Baru kicked a goal off the ground, suddenly the lead was 53 points only 11 minutes in. Ethan Reeves left the field with an ankle complaint midway through the term but goals to Manteit and then Johnson extended the lead past 60. Only a late Ed Barlow goal reduced the margin to 58 points but the damage had been done and the contest was as good as over by half time.

The third term was goal for goal as we added six goals to five, including a Lee Dale soccer special.

With a lead of 66 at three quarter time but Reeves, Baru and Manteit all iced with injury, the instructions were to win the last quarter but play slower footy to conserve energy with minimal rotations available. Brodie Murdoch chimed in early with a goal of the year contender and when Co-captain Andrew Boston slotted a classy left foot goal, he had confirmed our highest score of the season and locked in a home Preliminary Final.