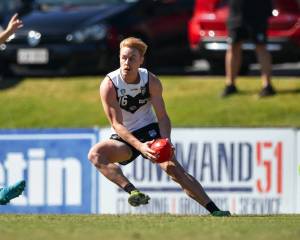 This weekend’s Coast Clash will be a tough, physical, and fast contest as both teams have so much to play for.

The Sharks, who are currently on top of the VFL ladder, need to win to ensure they give themselves the best chance to finish in the top 4.

The SUNS may not play finals this year; however, Joel Jeffery showed that if you perform in the VFL, you have every chance to be playing AFL the following week.

Jeffery kicked nine goals against Aspley last week and will make his AFL debut for the SUNS this week against Melbourne.

The SUNS will also have a few players come from the AFL team into the VFL this week, so they will also be looking to perform well and get back to playing at AFL level.

The Suns showed last week in their 78 point win over Aspley that they can play some damaging football when they are on.

Last Coast Clash the Sharks were too good for the SUNS, winning by 83 points in front of a big crowd on a Friday Night at Fankhauser Reserve in Round 5.

If Southport can’t stop the SUNS run and carry, which they displayed against the Hornets, it could be a much different result.

There is a lot of history between these two sides, and with several former SUNS players and coaches at the Sharks, it is set to be quite the contest.

He said, “One of the best things about having a competition that is so subject to change with covid restrictions, is as players and coaches we can only look one week at a time. So, although we know it’s exciting to be at the top of the ladder at this stage of the season, we know we have to play good footy this weekend and do everything we can to win.”

Southport defeated Essendon’s VFL team by 4 points last week in a thriller. The Sharks trailed all game. However, Tom Fields kicked a goal in the last minute to win the game. One of Southport’s key defenders, Tom Miller, suffered a neck injury and will miss this week. It is unknown when he will make his return, but he has avoided any serious damage.

You can watch all the action from this weekend’s Coast Clash for free either by heading to the Gold Coast Sun’s training oval at Metricon Stadium or on the Gold Coast Suns YouTube Channel. First bounce is at 10:30 am.