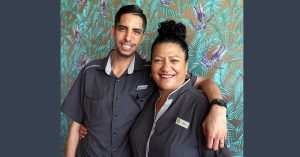 A long-time employee of club, Fee has mastered an array of outlets including kitchen, bars, Keno, Frenzy’s, Mackenzie’s Sports Bar and Café. She shares her passion for Sharks with son Jermaine, who has worked at the club for six years.

Although many may shy away from working with their parents, the pair enjoy it as they don’t get to spend much time together. “We often share a quick hug at work because we haven’t seen each other in ages!” she laughs.

“I think we work really well together,” says Jermaine, “although sometimes she doesn’t want to take direction from her gaming supervisor!” he jokes.

Mother’s Day for the two usually consists of Fee ringing Jermaine to remind him of the significance of the day who often says his present “is still coming in the post- it’s the thought that counts!” he jokes. They both then catch up with Fee’s other son and his four children.

“My four grandchildren are definitely the best Mother’s Day present of all” – Fee Hewson.

We’d like to wish Fee, as well as all the other hard-working Mothers, Step-Mothers, Foster Mothers and Grandmothers a wonderful Mother’s Day! You deserve it.

Southport Sharks has a range of Mother’s Day events in Frenzy’s and Carmody’s to spoil Mum- Buffet breakfast, three-course lunch and more!