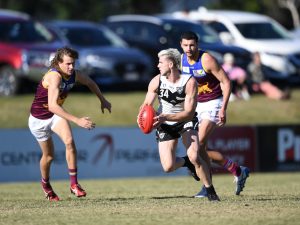 Southport remains on top on top of the VFL ladder, after defeating the Brisbane Lions by 107 points at Fankhauser Reserve on Saturday.

Jacob Dawson continued his hot form with another 40 disposals, 10 tackles and 10 clearances.

Michael Manteit is also back to his best, collecting 34 disposals.

Andrew Boston came back into the team this week after being rested for the Sydney game, and made his usual impact with 33 disposals and 14 clearances.

The Sharks led from start to finish dominating the clearances 49 to 20 and had 39 more inside 50s than the Lions.

The last time they played the Lions was the 2019 NEAFL Grand Final 643 days ago, which was a completely different result. Brisbane winning by 77 points.

Almost two years on, Steve Daniel has his side humming, winning their last five games and once again sitting on top of the VFL ladder.

“We have had a terrific start to the year. I’m so proud of what we have been able to achieve so far. But the job is nowhere near done!” Daniel said.

“The challenge now when you keep winning games and by big margins like today, how do you not get complacent because the moment you do, you start losing games. For me, it comes back to mindset, and I can’t fault how the boys went about it today.”