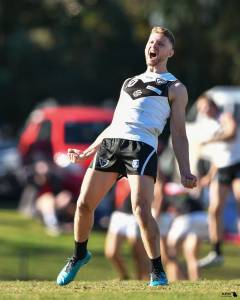 The AFL has released the 2022 Victorian Football League Round One fixture and matchups for the entire season.

In Round One, the Southport Sharks will travel to Melbourne to take on the Richmond Tigers at Punt Road on Sunday 27 March at 10:35 AM AEST.

21 teams will play 18 games each in a 22 round home-and-away season, the top eight will contest a four-week finals series, and the Grand Final is scheduled for the weekend of the 17/18th of September.

It is an exciting fixture for the Southport Sharks, however, Head Coach Steve Daniel said he is only focused on Round One at this stage.

Daniel said, ” We are really looking forward to playing a full year after two interrupted seasons, but my focus at the moment is just trying to beat Richmond in our first game.”

“It’s going to be a tough challenge, but we are ready for it, and the boys are tracking along nicely.”

There will be plenty of excitement ahead of the match with VFL and AFL Richmond Premiership player Jacob Townsend playing for the Sharks this year.

This will be the first of eight trips to Victoria for Southport for the year. The Sharks will play every game of the 2022 season in either Victoria or on the Gold Coast.

Daniel said, “the conditions down there are different to the conditions up here, which will be a challenge, but we pride ourselves on being able to adapt.”

Dates, Times and Venues for the remaining games will be confirmed in due course, and the Sharks are hopeful that the club will host triple headers at Fankhauser Reserve with the QAFLW teams this year.

Ticketed VFL matches will be $10 for adults, $5 for concessions and children under 15 are free.

The Southport Sharks are pleased to announce that all home games at Fankhauser Reserve will be FREE, and there will be plenty of activities on game day for families, past players, and officials, as well as the community to enjoy.

The Seven Network will broadcast one VFL game a week plus finals, live and free on 7plus. All VFL matches will be live-streamed and available on-demand on the AFL Live App.