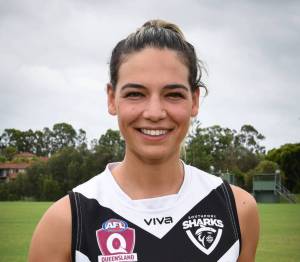 The 2022 QAFLW fixture is out, and the Southport Sharks are excited about the year ahead.

Last year’s co-captain Hannah Davies said the excitement levels are through the roof.

Davies said, “Southport has a great history, and we get to be a part of starting a legacy of being the first QAFLW team at the club, which is so special.”

Going from one team in QFAW Division 1 to two teams in QAFLW means there have been a lot of new girls on the training paddock.

Davies said that everyone is bonding together well as a group. The pre-season camp that occurred on the weekend at Mt Tamborine had a lot of team building activities which was helpful for that.

“It was so good to spend time with the other girls and get to know everyone at a deeper level. We come away feeling like a family, which is great,” she said.

Davies is looking forward to the Sharks home game against Bond University, which will be the curtain-raiser to the North Queensland v South Queensland representative game.

“It will be a real showcase of women’s football on the Gold Coast, which will be awesome and something we are excited to host.”

In terms of the whole fixture, Field is really happy with it.

“It’s a great fixture. We are looking forward to continuing our old rivalry with Aspley and starting some new ones with clubs like Bond University and Yeronga, who we have never played before.”