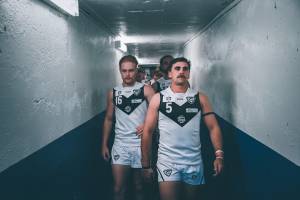 The AFL has today announced that the 2021 VFL season will not be completed due to the challenges surrounding the COVID-19 situation across the country.

A 2021 VFL Premier will not be awarded with the league to recognise Footscray as the VFL minor premiers after an undefeated 10-match season.

Southport Shark’s GM Football Operations – Jarrod Field said although disappointed that the season could not be finished, he is proud of the way all coaches, staff and players have handled themselves this year.

“It has been a difficult year, with all the challenges covid has created for everyone involved in our program and it’s disappointing they won’t be rewarded with playing finals footy.”

“Overall, though, I am extremely proud of what we were able to achieve in our first year in the VFL. The way our group has adapted all year and had a club first attitude has been sensational.”

There were many highlights in the Sharks first year in the VFL.

Firstly, travelling to Melbourne in Round 1 and overcoming a 31-point deficit to win the club’s first game in the VFL, against Carlton.

Winning the inaugural VFL Coast Clash in front of big home crowd on a Friday Night was also very special.

Southport’s come from behind win against Sydney at Tramway Oval was another highlight, before Tom Field’s match winner against Essendon in Round 15.

When the VFL season was prematurely stopped, the Southport Sharks were second on the home and away ladder, winning 9 games and losing one game with a percentage of 180.7%.

The Southport Sharks are committed to staying in the highest level of competition and look forward to the 2022 VFL season.