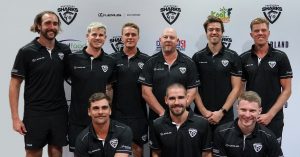 The Southport Sharks are pleased to confirm that Andrew Boston and Seb Tape will remain as co-captains as the club enters a new era in the VFL.

VFL Head Coach Stephen Daniel is proud to call Boston and Tape his captains for 2021.

“They both have a huge influence. I think that is why they have been voted in again. Their leadership around the club is fantastic. The way they go about it at training is second to none.”

Boston and Tape have led the club together since 2017 and are the 2018 NEAFL Premiership captains.

Mike Manteit, Mackenzie Willis and Tom Fields have all remained in the leadership group.

After an impressive pre-season, Brayden Crossley was promoted to the leadership group as have new recruits Billy Gowers and Jacob Dawson.

The group was announced at the 2021 Season Launch on Tuesday Night in front of patrons, sponsors and the board ahead of the Sharks big Round 1 clash against Carlton in Melbourne.