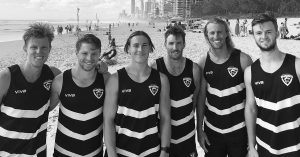 From left to right as pictured.

Tom Fields
Number: 19
Previous Club: South Adelaide (SA)
Why Southport?
After meeting Steve Daniel and seeing the strong culture the club has built, it was honestly a no brainer. The facilities and rich history at the club are amazing.

Mackenzie Willis
Number: 10
Previous Club: Gold Coast SUNS (AFL)
Why Southport?
After rupturing my ACL at the start of 2018, and being delisted from Gold Coast SUNS, I was hungry for another shot at AFL. I believe the profile of NEAFL and the high standard of football played by Sharks presents a great opportunity. Southport is a very professionally run club with a host of AFL system coaches and I was keen to reunite with them after our time together at the SUNS. Having moved from Hobart and now settled on the Gold Coast with my partner, I feel right at home and look forward to helping the Sharks continue its winning tradition.

Rhett Lloyd
Number: 13
Previous Club: Claremont (WA)
Why Southport?
After playing in the WAFL for two years, I was looking to take my footy to the next level. Southport showed a lot of belief in me and helped me achieve this. My first impression was the presence of mateship around the club, which really appealed to me. The recent success and history of the club shows it is something special to be a part of and I couldn’t wait to be onboard. With the impressive facilities and coaching staff, it was a hard offer to turn down. I’m really looking forward to contributing to what I hope can be another successful year for Sharks!

Tom Miller
Number: 20
Previous Club: Tatura (VIC)
Why Southport?
The challenge of taking the next step with my football was something I had always wanted to do. Having played under Steve Daniels in 2011, I knew he would be the right coach to maximise my potential and to continue the club’s proud history. Living on the Gold Coast was also a huge draw card, so the decision was an easy one.

Matt Shaw
Number: 3
Previous Club: Carlton (AFL)
Why Southport?
I have great respect for the way Steve Daniel coaches and connects with his players to get the best out of them. I also have a lot of good mates, ex-team mates and coaches from my career at the Gold Coast SUNS on the team.

Jamison Shea
Number: 21
Previous Club: Footscray (VIC)
Why Southport?
Southport gave me the opportunity to further my development and put me on a path to achieve my aspirations in football. The club has a fantastic culture, amazing resources, facilities, coaches and staff. Southport is the place to be!